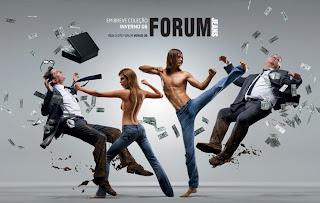 I thought that this Brazilian Ad was hilarious! This new campaign from Brazil for Forum Jeans depicts models beating up government officials, illustrating its feelings towards the country's government. I think it successfully communicates a specific story to its audience. I also admire that it grabs the audience’s attention right away. Many people don’t agree with the decisions that the government makes. I guess in these jeans, you will have the power to fight back. I was a little confused about the mud though. Is the Ad implying that these government officials are knee deep in mud? Or something else? ☺
It reminded me of the Levis Ad on page 205, Chapter 10, in the book. I like the minimalistic aspect of the ad as well as the interchanging of different animal material rugs at the bottom. It has a very crafty look in morphing two people together to communicate that men and women both can now where these jeans. However, with the text I get a sense of ‘one size fits all’ even though I know that is not what they were going for. Because the people change in each frame, I think the size 5 01” should as well. Who wouldn’t want those jeans after seeing this ad?!
Posted by Chaniece P. at 1:52 PM